A WOMAN IS A POEM

Biography via The World’s Artist:

“Hermenegildo Anglada Camarasa (1871–1959) studied at the school of fine arts of the Llotja de Barcelona, where he was the student of Modest Urgell, whose work influenced his first landscapes. In 1894 he moved to Paris, where he embraced a more individual style, after that of Degas and Toulouse-Lautrec, with their portrayals of nighttime and interior subjects.

But his work was additionally set apart by the extraordinary hues which presaged the arrival of Fauvism. Exuberant brushwork reveals strong Oriental and Arab influences.

After a short stay in Valencia, in 1904 he returned to Paris and settled in Montmartre. Camarasa met Picasso and opened a painting school, which was attended by many students who included María Blanchard. He was one of the founders of the Autumn salons of Paris and related to the artists of the Vienna Secession, which he even exposed.

Its style, part of the naturalistic landscape of Modest Urgell, is influenced by the development of Symbolist painting of end of the century and especially by the Rosa-Cruz group.” 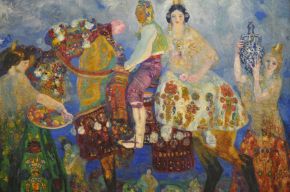 11 thoughts on “Artist of the day: Hermen Anglada Camarasa”

"April is the cruelest month, breeding
Lilacs out of the dead land, mixing
Memory and desire, stirring
Dull roots with spring rain."